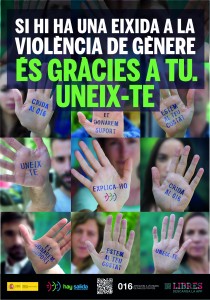 David Barelles, subdelegate of Spanish Goverment in Castellón, presented the campaign to raise awareness against gender violence that the Spanish Government is carrying out in Castellón and which, he said, has an impact on 20,000 people a day. Barelles explained that “the fight against gender violence is a priority for the Government of Spain and one of the solutions is in social awareness.” He therefore thanked the “selfless collaboration” of TUCS (Transport Urbà Castellón), HICID, Autos Mediterráneo and TRAM, “for the dissemination of this message because with perseverance, social unity, awareness and deep conviction there is a way out.” The campaign has an impact on 20,000 people daily, users of public transport.

This website uses cookies to improve your experience while you navigate through the website. Out of these, the cookies that are categorized as necessary are stored on your browser as they are essential for the working of basic functionalities of the website. We also use third-party cookies that help us analyze and understand how you use this website. These cookies will be stored in your browser only with your consent. You also have the option to opt-out of these cookies. But opting out of some of these cookies may affect your browsing experience.
Necessary Siempre activado
Necessary cookies are absolutely essential for the website to function properly. This category only includes cookies that ensures basic functionalities and security features of the website. These cookies do not store any personal information.
Non-necessary
Any cookies that may not be particularly necessary for the website to function and is used specifically to collect user personal data via analytics, ads, other embedded contents are termed as non-necessary cookies. It is mandatory to procure user consent prior to running these cookies on your website.
GUARDAR Y ACEPTAR